It's not often we hear your love story from the photographer's point of view. Here is what Steven at Adelaide-based Sven Studios had to say about an this incredible destination wedding he recently photographed.

Heading over to the Greek islands to cover Kerri and Tony’s Santorini wedding has got to be one of the highlights in my wedding photography career so far! The picturesque sights available in the town of Thera, nestled high amongst the cliffs surrounding the caldera of Santorini is an absolute dream to photograph, and it makes it so much easier when I have an amazing couple as Kerri and Tony as subjects! Both Kerri and Tony live in Adelaide, South Australia, but chose to hold a destination Santorini wedding in order to head around Europe on honeymoon. Another reason was that Kerri and Tony met in Canada, where Tony lived, so in order to make the wedding fair to both families, they held it somewhere in between the two countries!

While shooting a Santorini wedding is an absolute blast and pretty much a wedding photographer’s dream location to shoot at, walking in between locations in the height of the Greek summer was no easy task! Thera is a town located right at the top of the cliffs, so walking anywhere really takes it’s toll on your thighs! I mention this as Tony and Kerri were both prepared at different locations a good walk away from one another – good thing I’m fit! ????

I started the day with Tony and his family, with his groomsmen who all travelled out from Canada for the big day. After getting in a bit of trouble splashing a bit of water out from the pool in order to get a shot of the boys jumping in, I took photos of them all getting ready. It was a fairly laid back affair with Tony showing little to no signs of nerves, and more keen on having a good time with his mates. 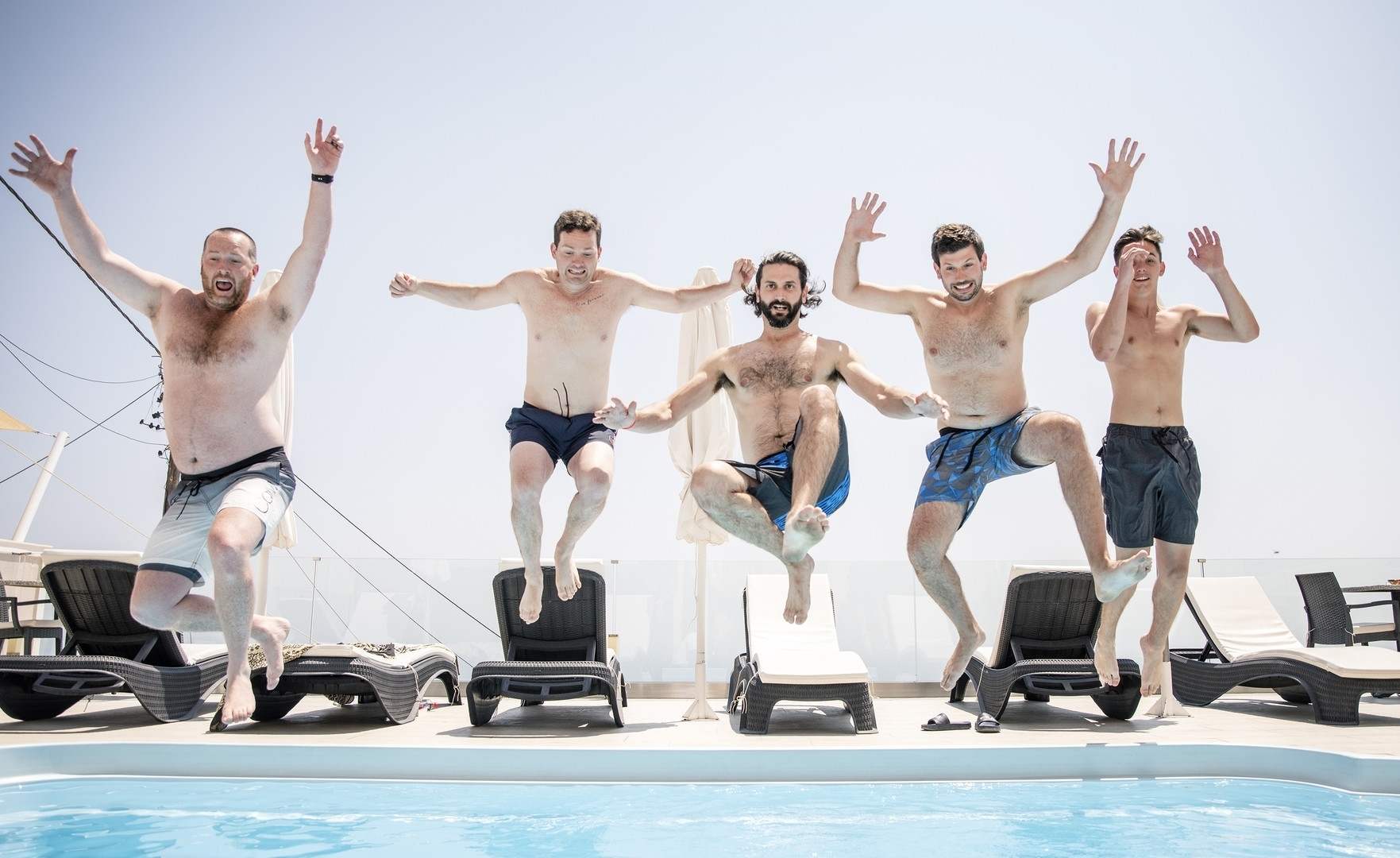 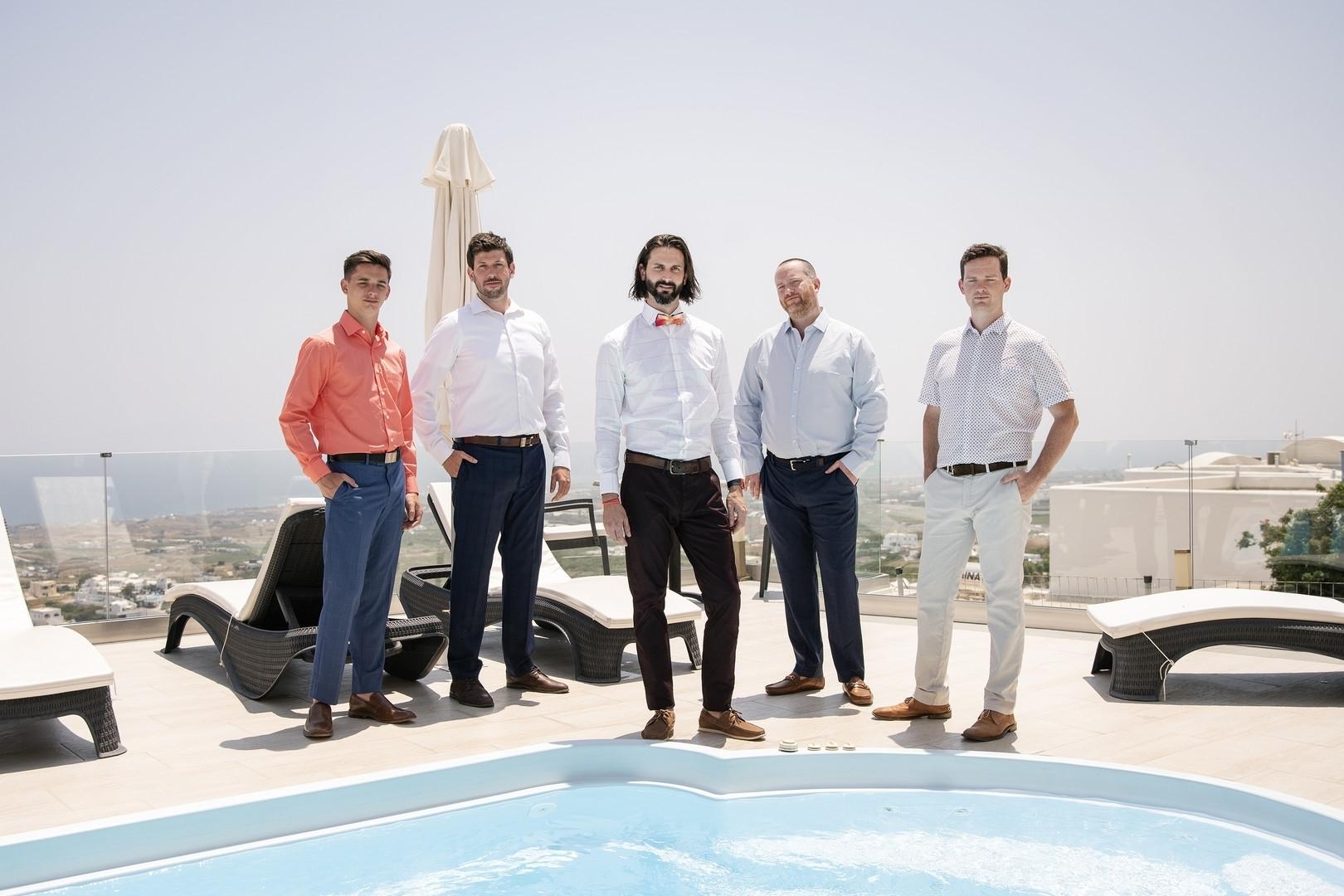 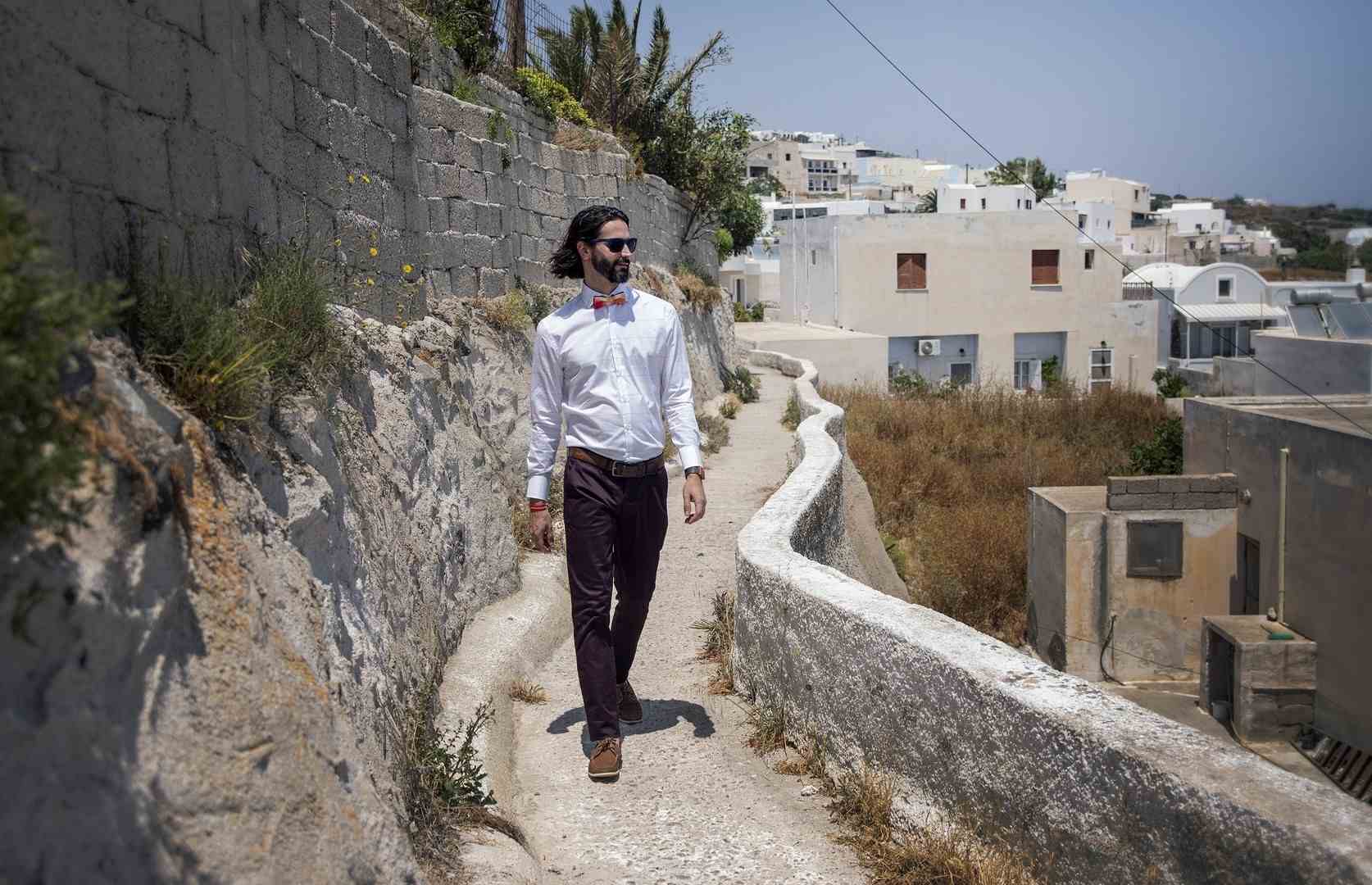 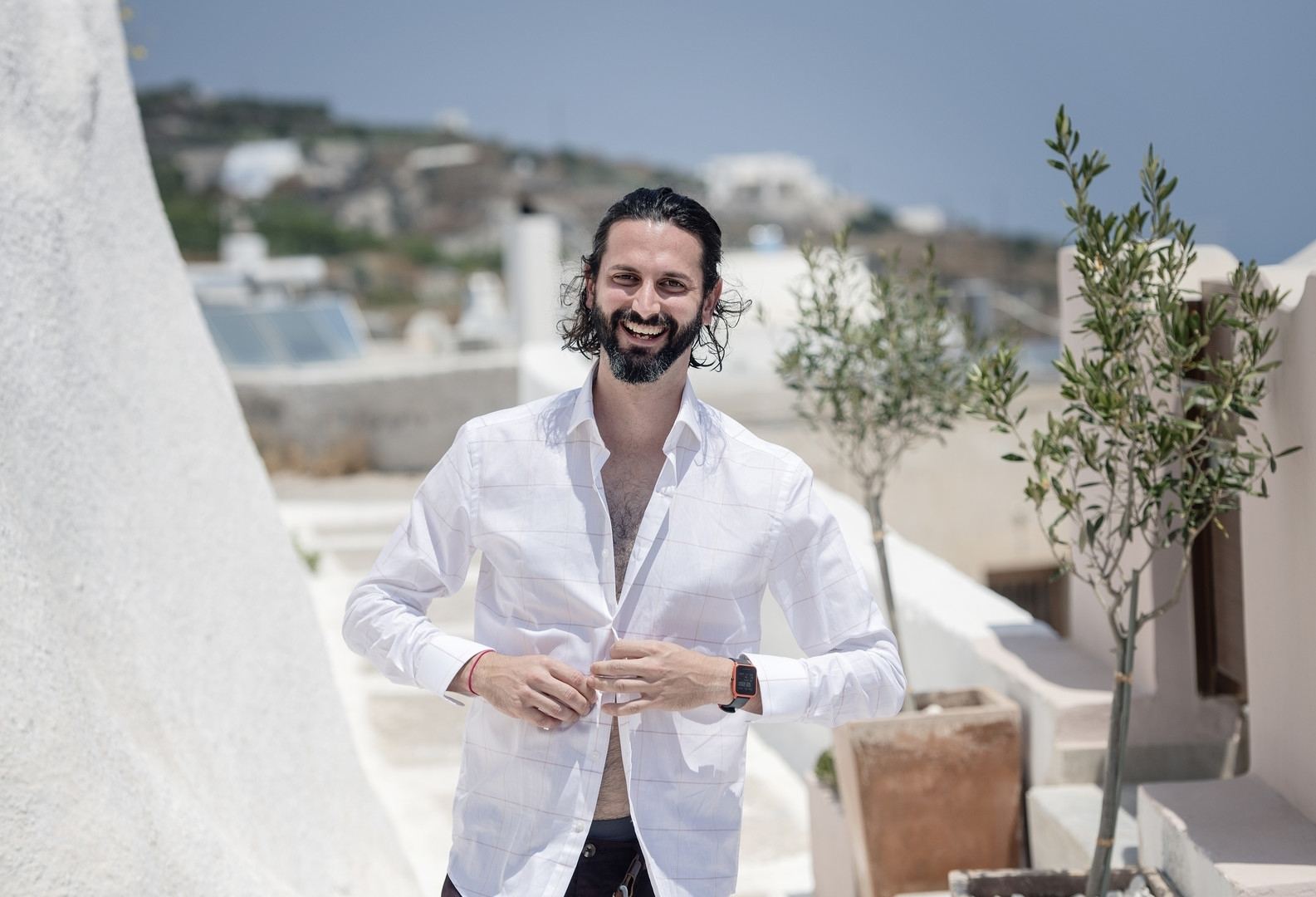 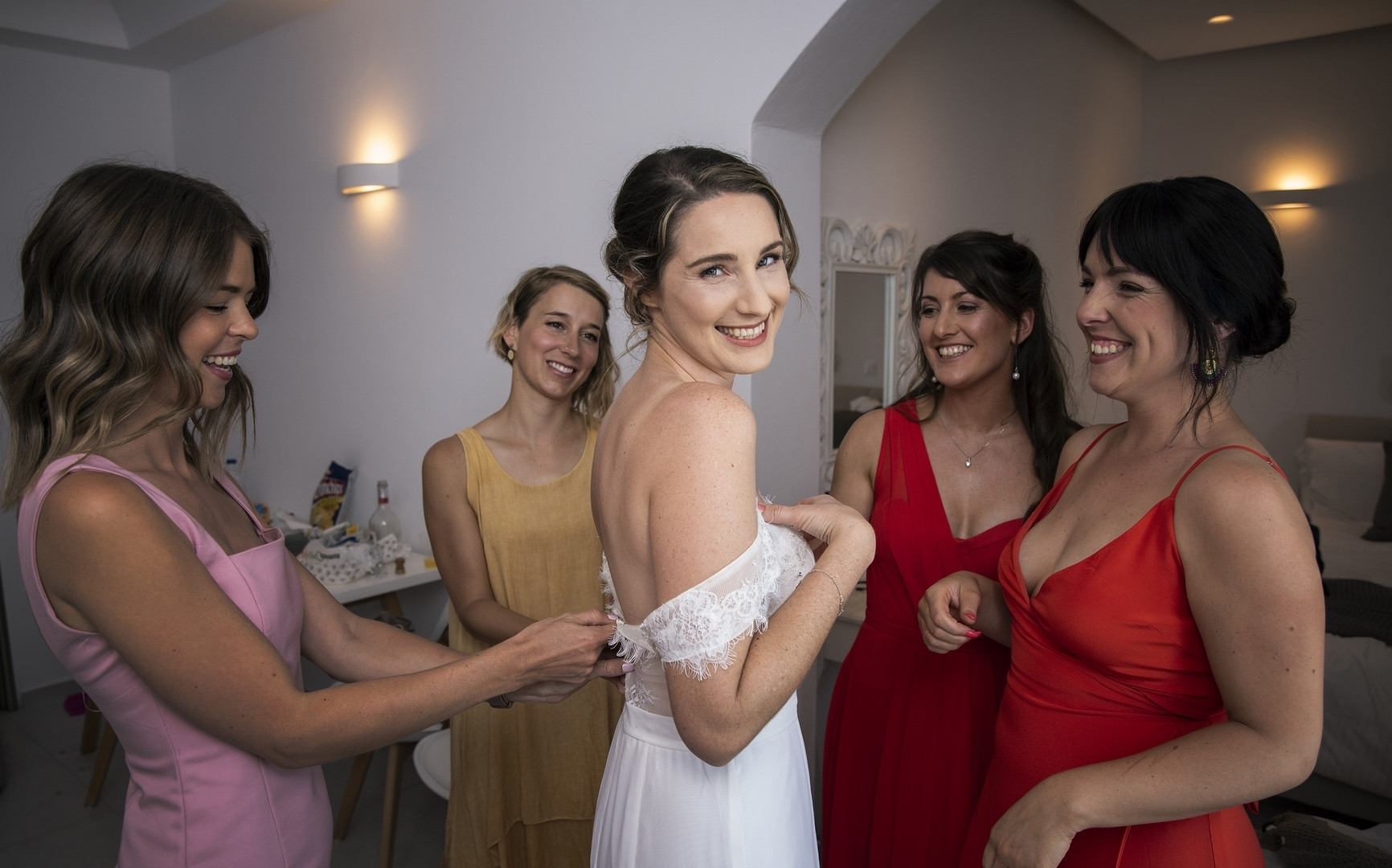 Kerri and her bridal party were the same, laughing and joking about whilst occasionally doing little dances all around the rooms and making funny faces in front of the camera. Perhaps the only difference was that everyone got ready inside so as to avoid the beating heat of the lovely sunny day. Kerri’s parents and flower girl dropped in for a visit just as she was about to leave which was nice as we got to have some family photos done before walking up to the ceremony at Dana Villas. 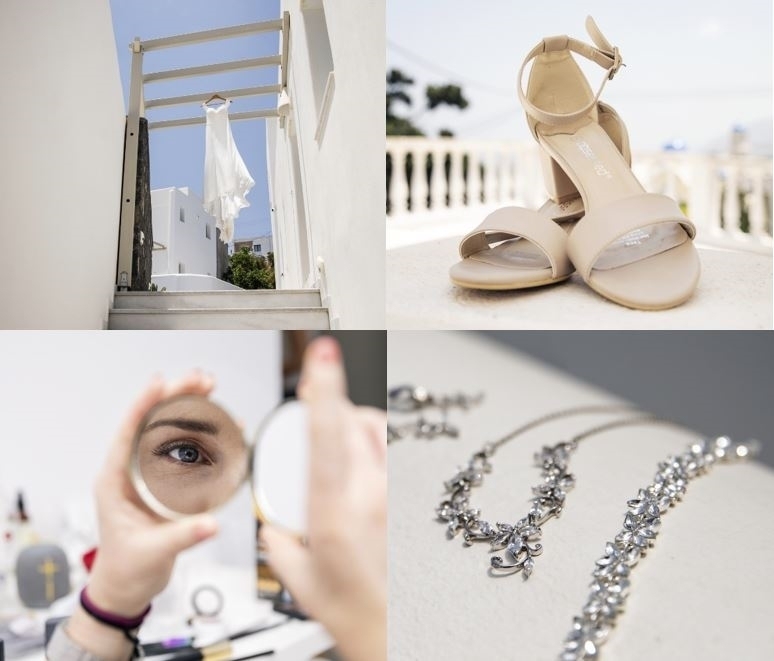 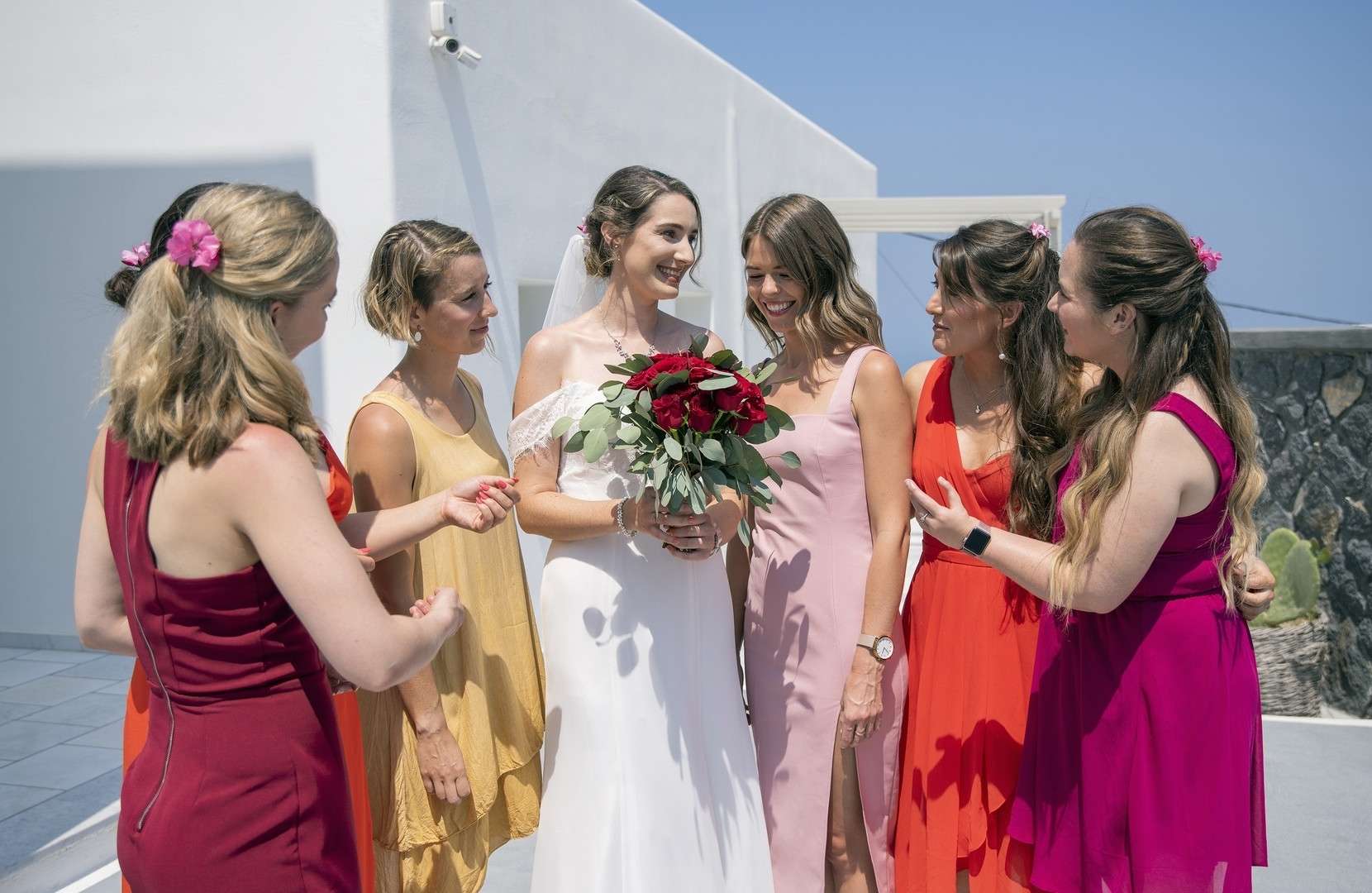 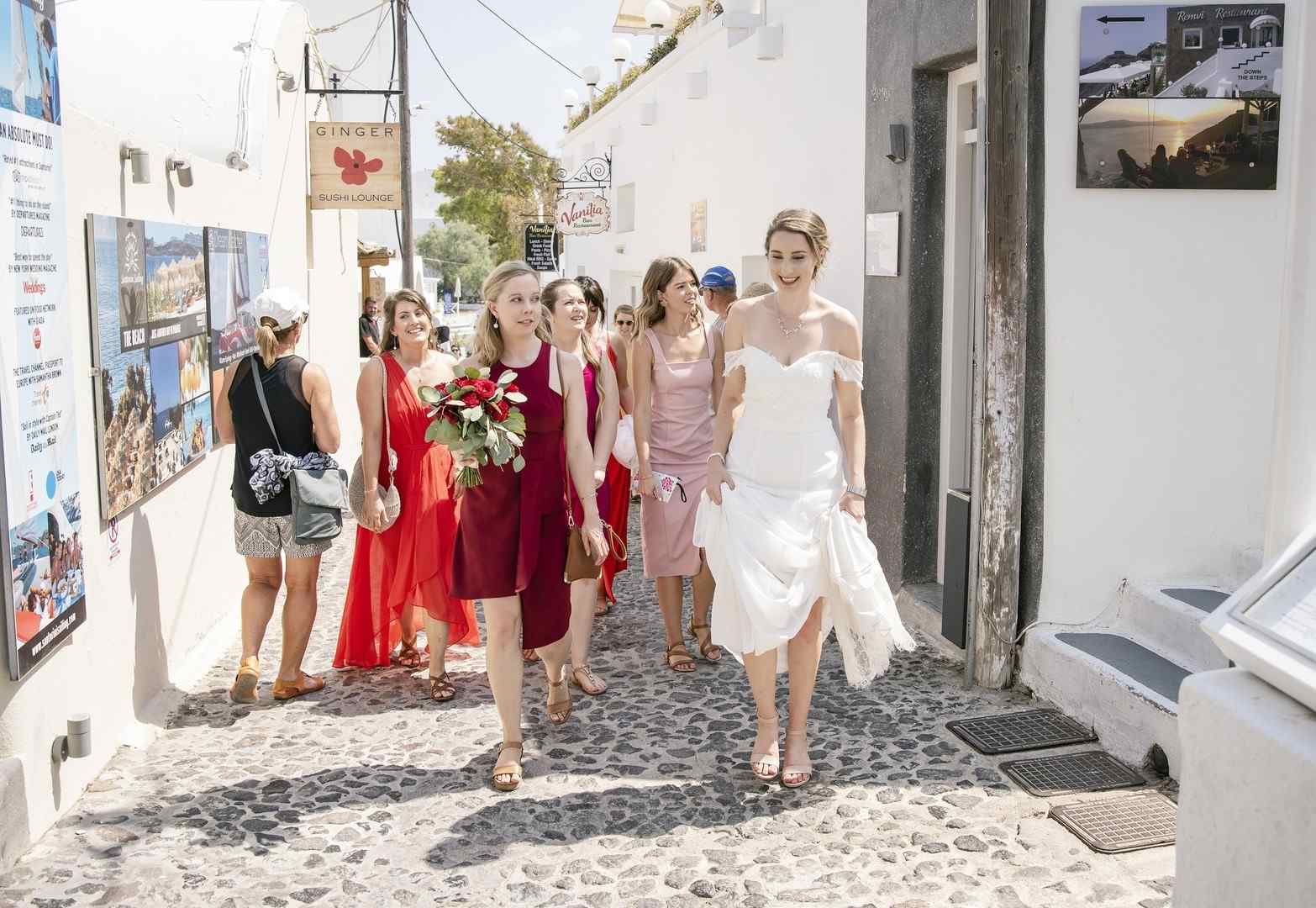 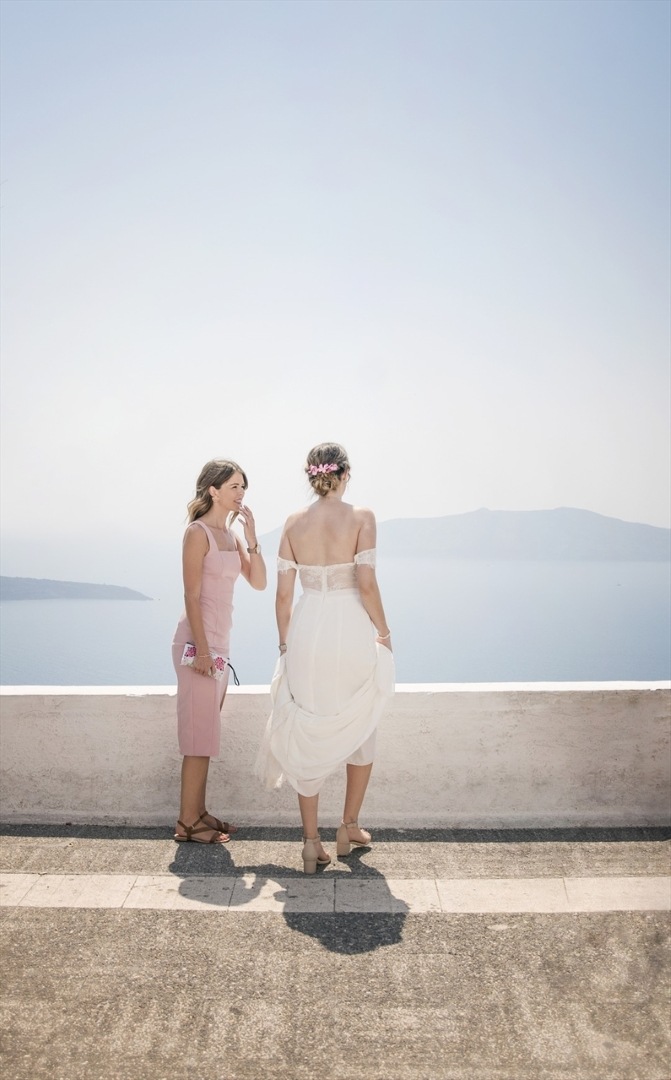 The Dana Villas wedding ceremony location is a wonderful vantage point, overlooking the entirety of the Santorini caldera – caused by an ancient volcanic eruption. There is a purpose-built wooden arbour that covers where the bride and groom stand while having a stunning viewpoint to the waters below. It’s conveniently located amongst some of the more upper scale hotel accommodations available on the island, and also within short walking distance to the center of the town of Thera. 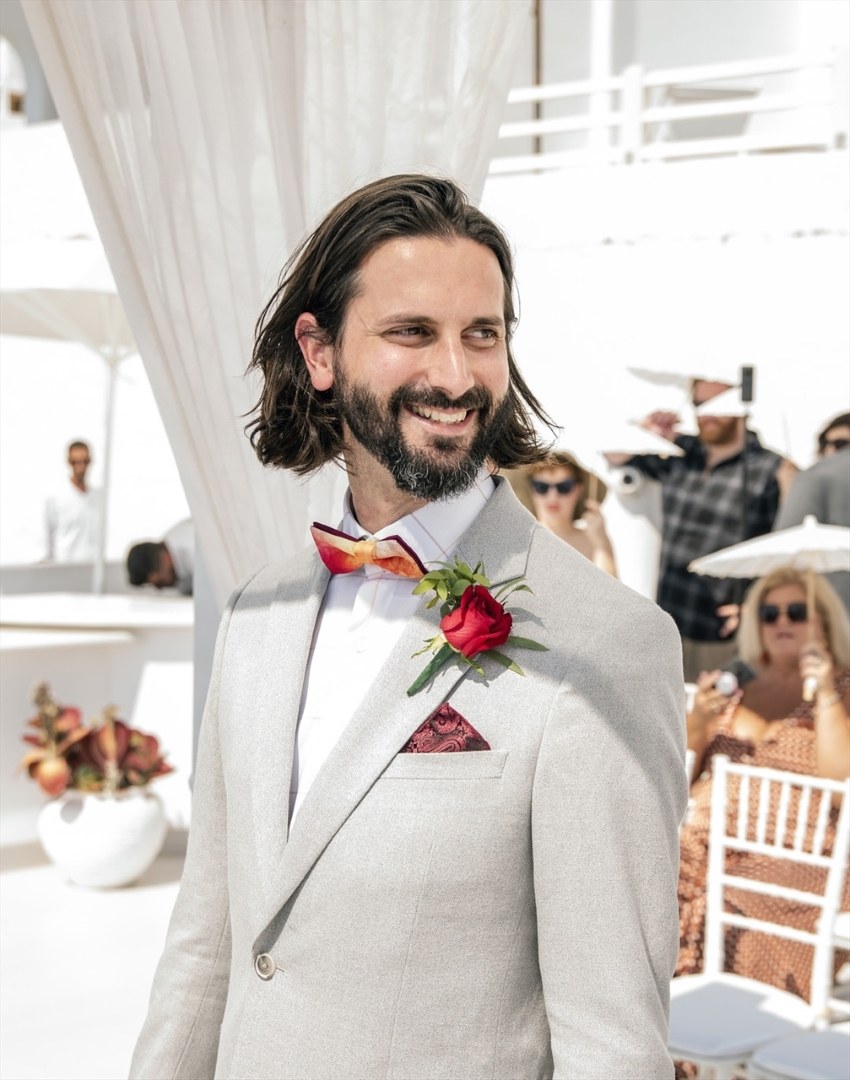 Kerri and Tony’s wedding ceremony was officiated by a friend of theirs using some personal in-jokes and personalised vows that made sure their congregation were chuckling throughout. They even went as far as incorporate their mutual love of board games by having the rule book of ‘Settlers of Catan‘ as their marriage registry book. As everyone had travelled, both from Canada and Australia the congregation was a rather intimate affair with no more than 40-50 people in attendance. 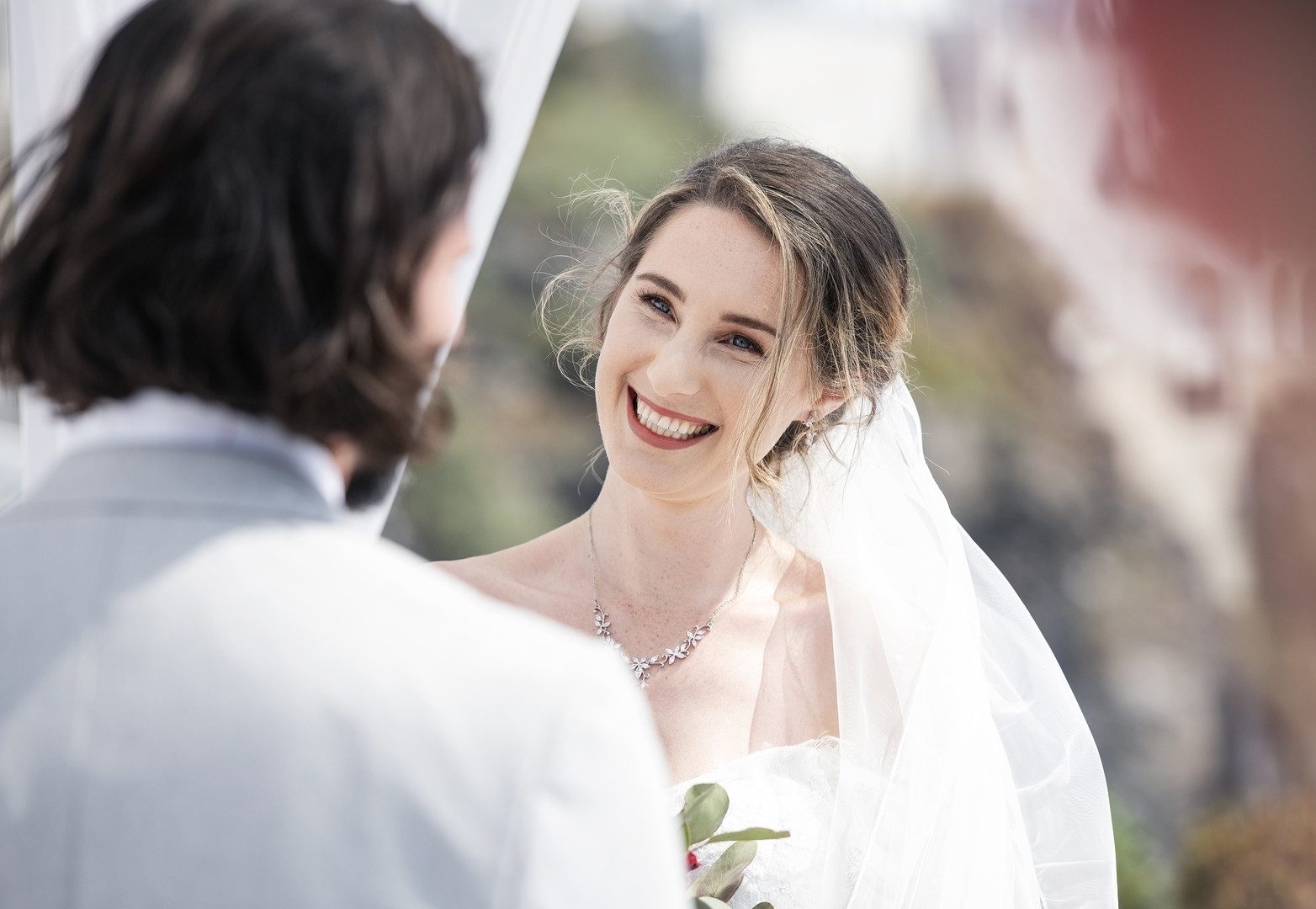 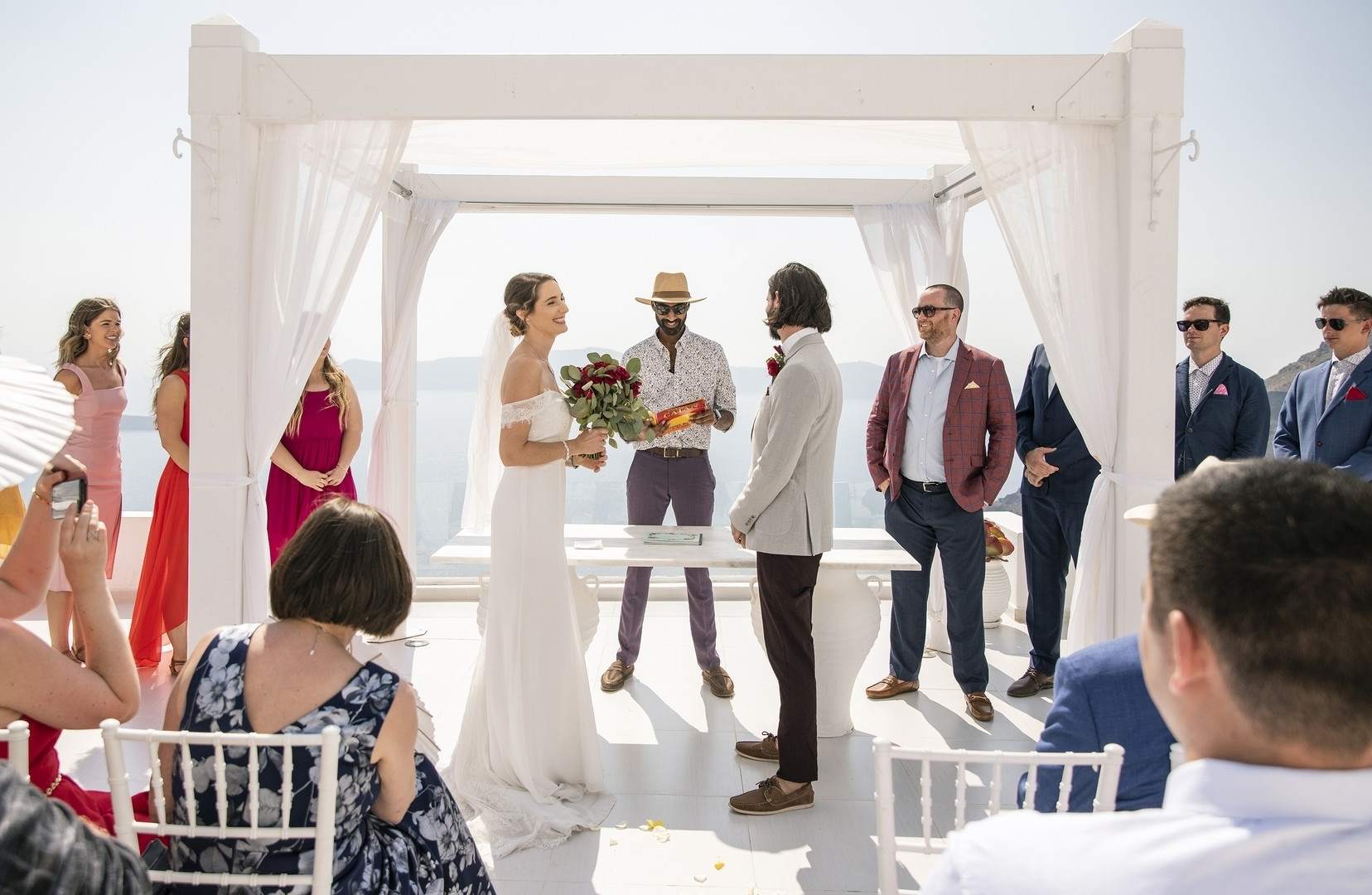 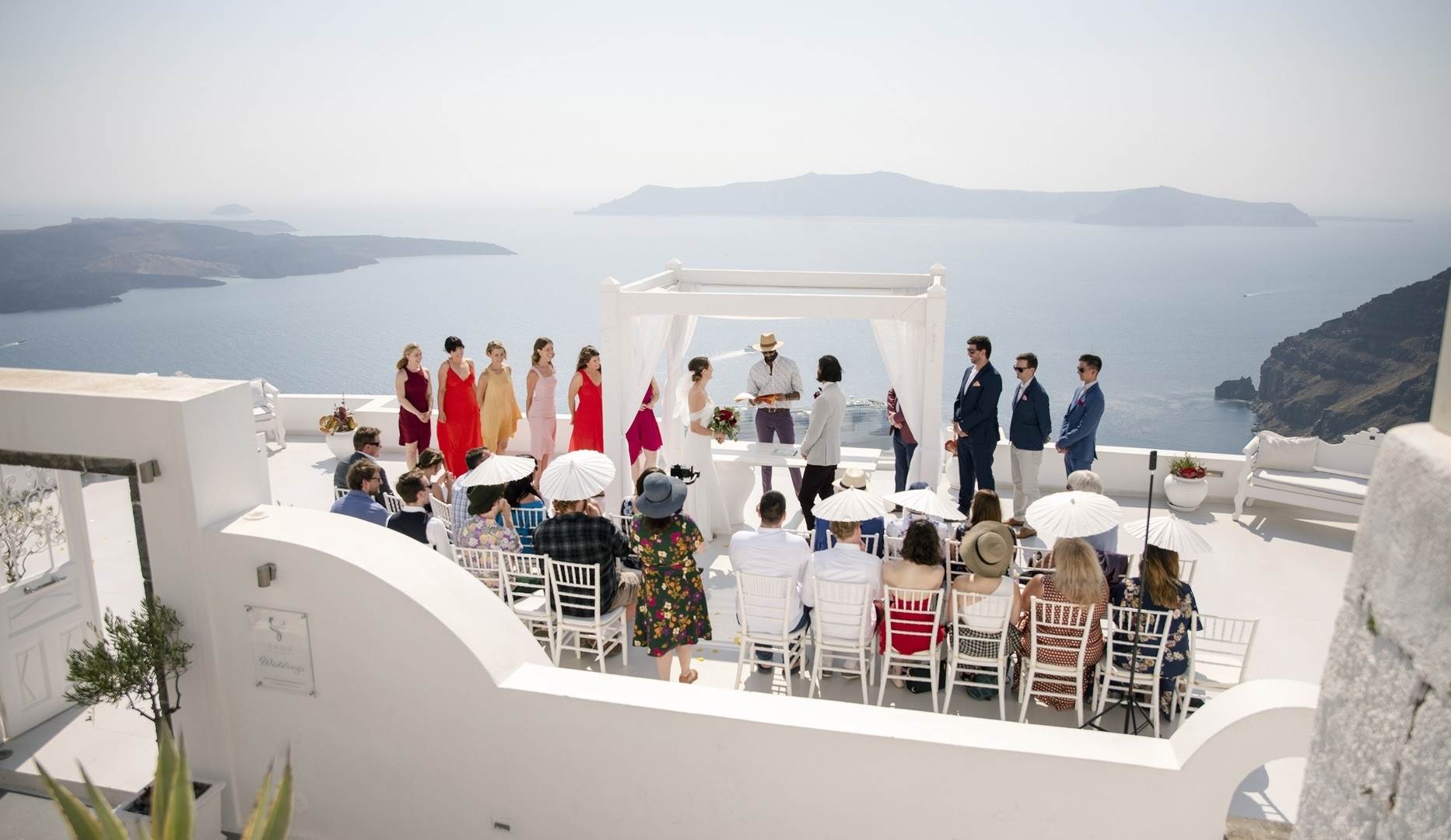 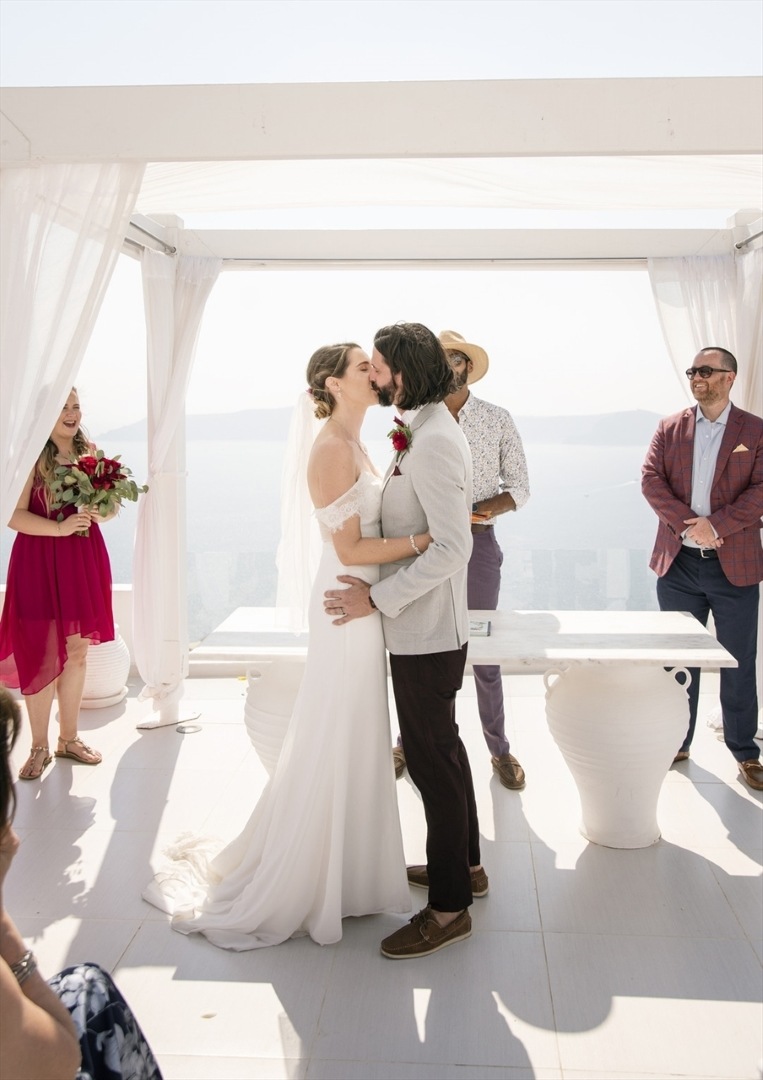 As Kerri and Tony weren’t overly keen on the idea of spending too long having glamour photos taken, I had spent the previous few days I had in the island scouting out spots on the walk-in between Dana Villas and the Apelos cafe – where their reception was taking place. The aim being that I could utilise the wonderous views of Thera on Santorini, without taking up too much time before entering their reception and starting the party ???? 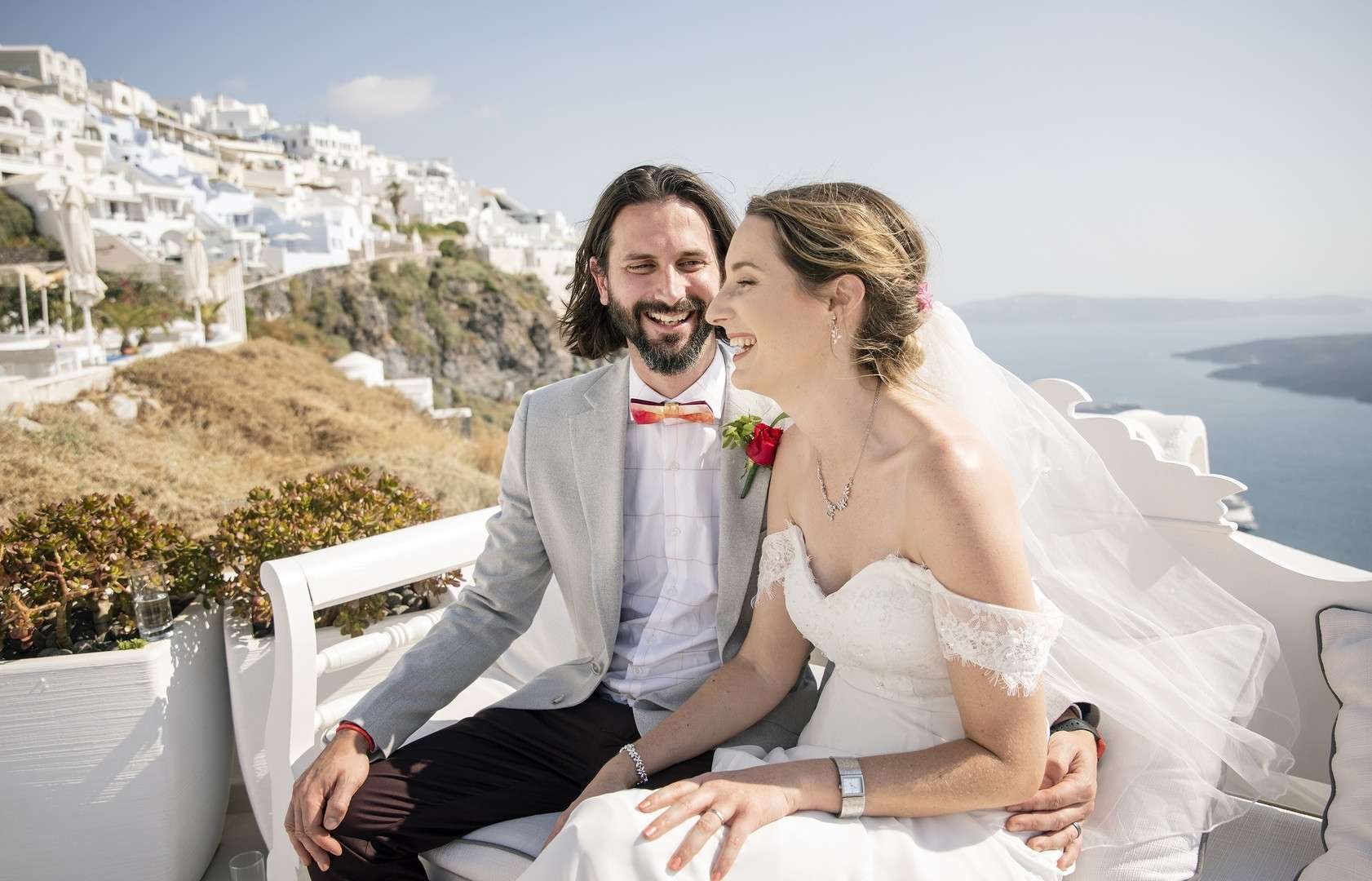 A goal of mine before heading out to Santorini was to find a spot to capture the iconic blue domed church and three bell arch that’s symbolic of the Greek isles – luckily I found a spot in Thera for just that purpose and it wasn’t too crowded with tourists for us to use. 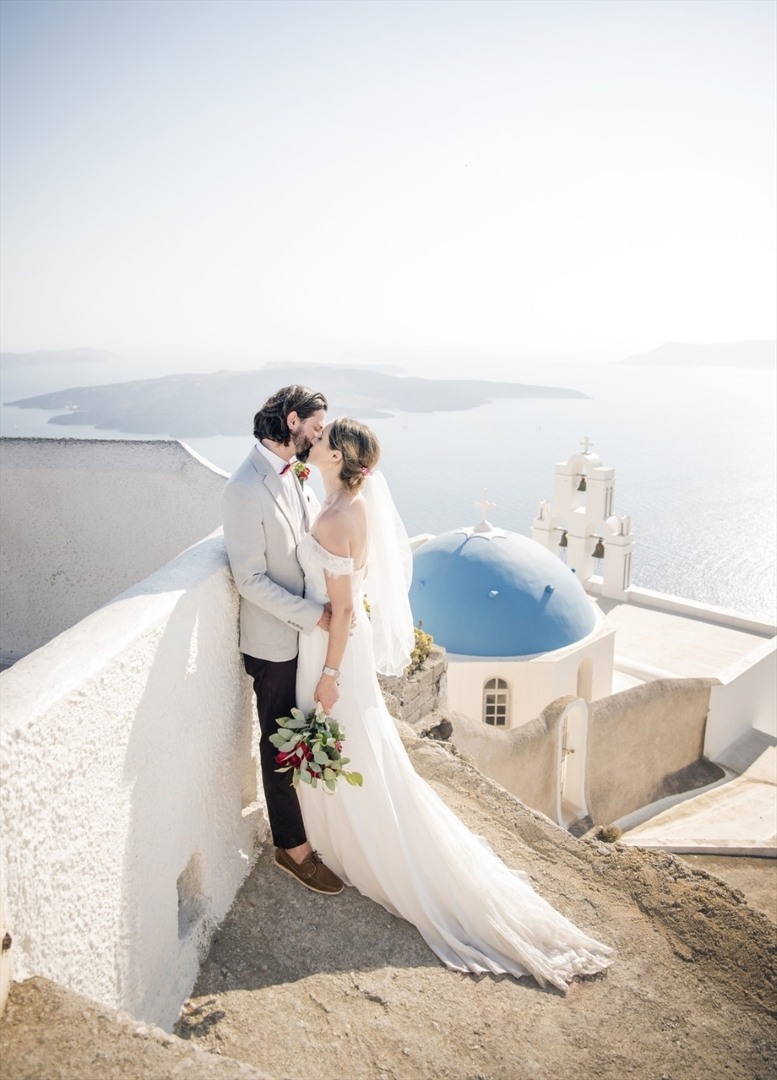 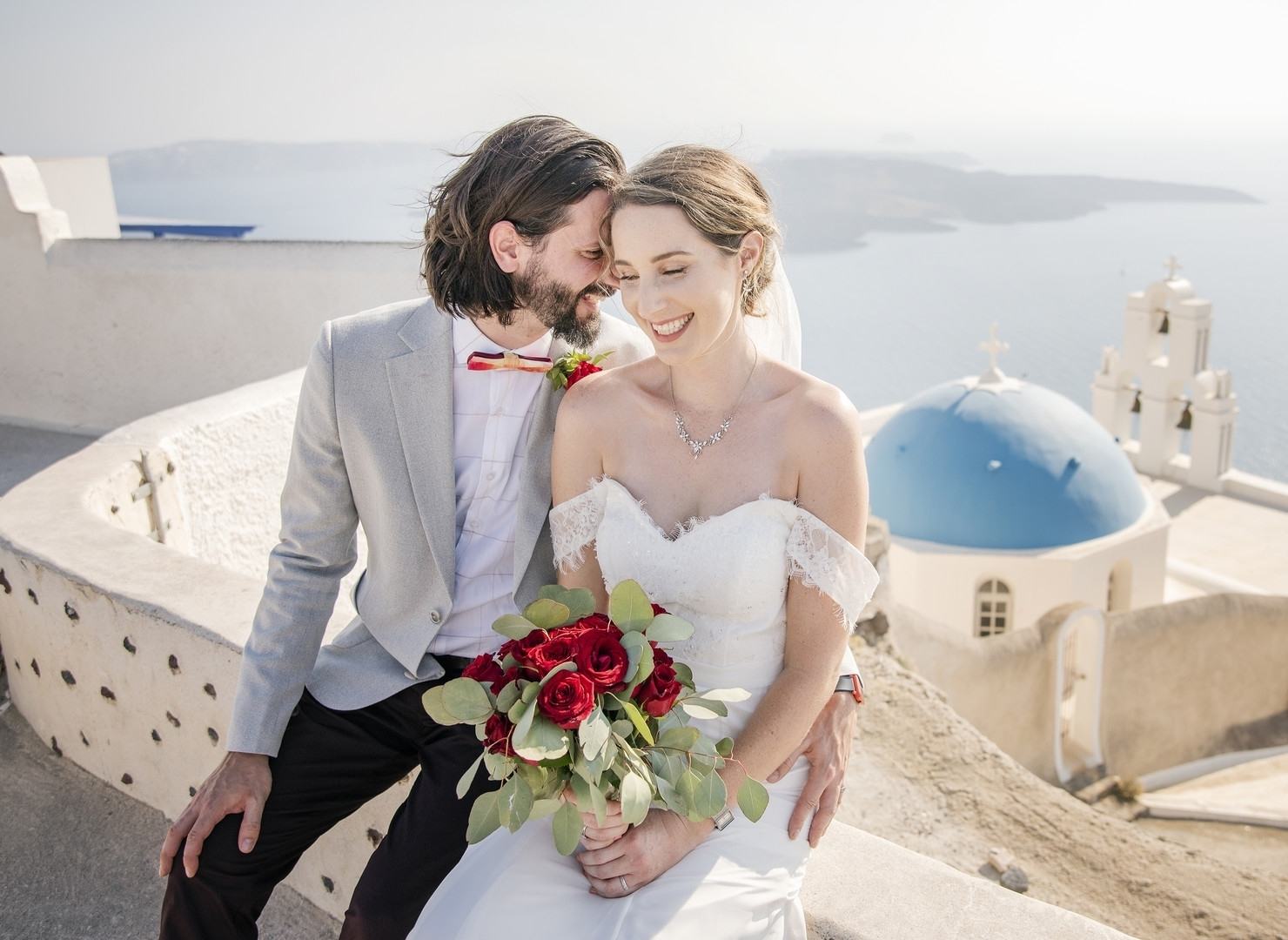 For other shots I simply used the stairways and wonderful vistas the island naturally provides.

Just a tip for anyone out there planning a Santorini Wedding – try to book your day during a period where there are few cruise ships in port, as the island tends to fill up with tourists in no time when there are 3-5 cruise ships in town and some of the best spots for photo taking just get swamped! 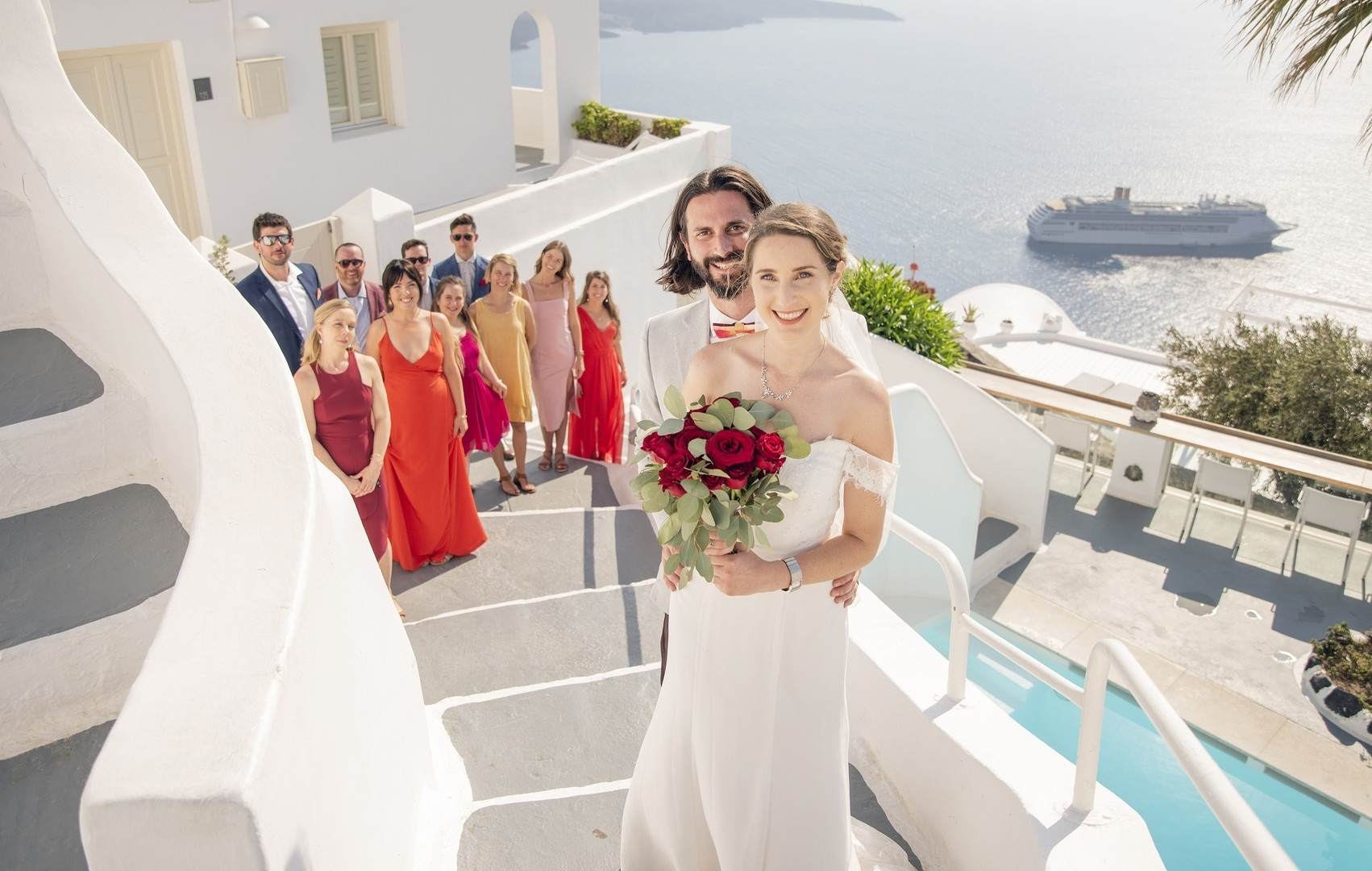 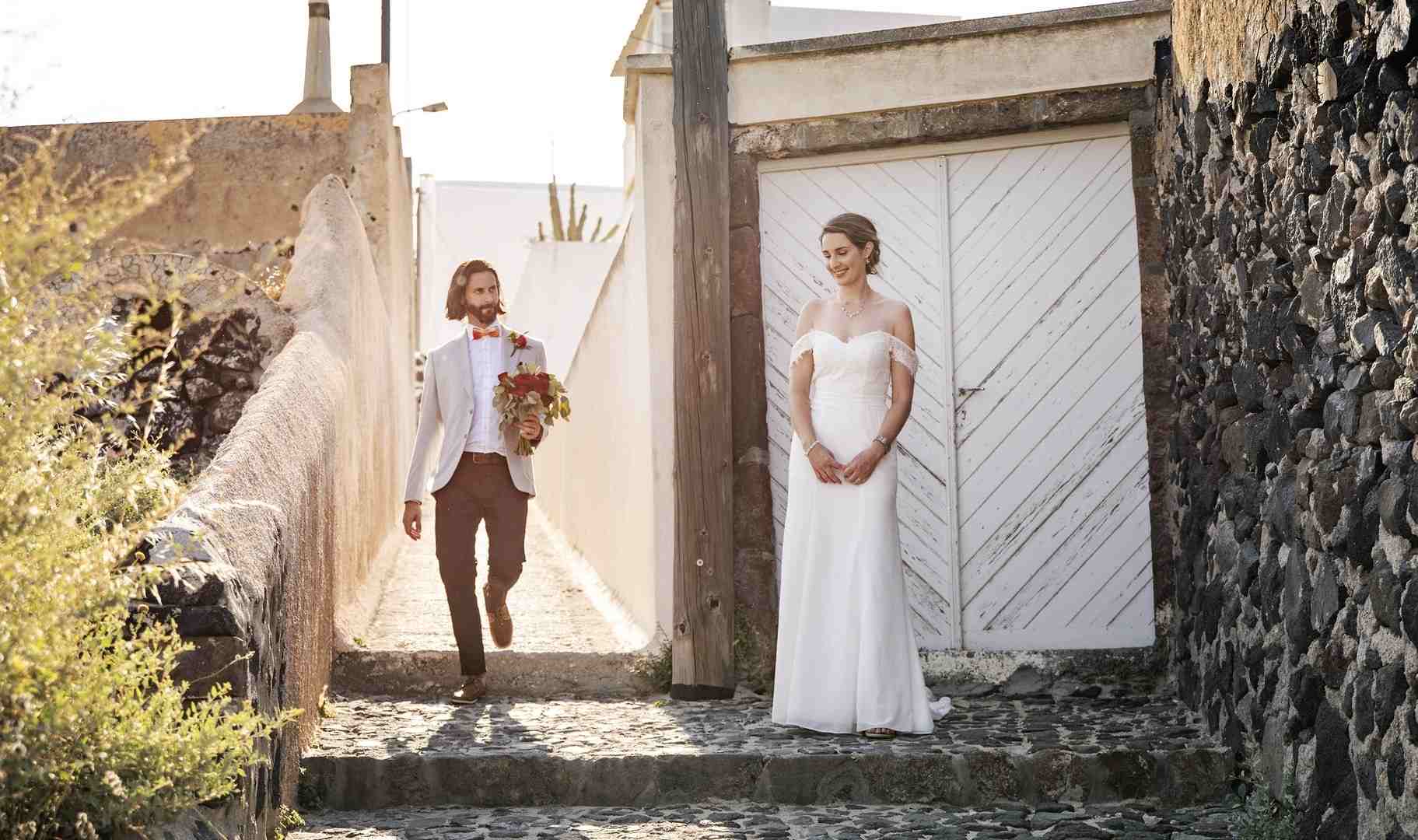 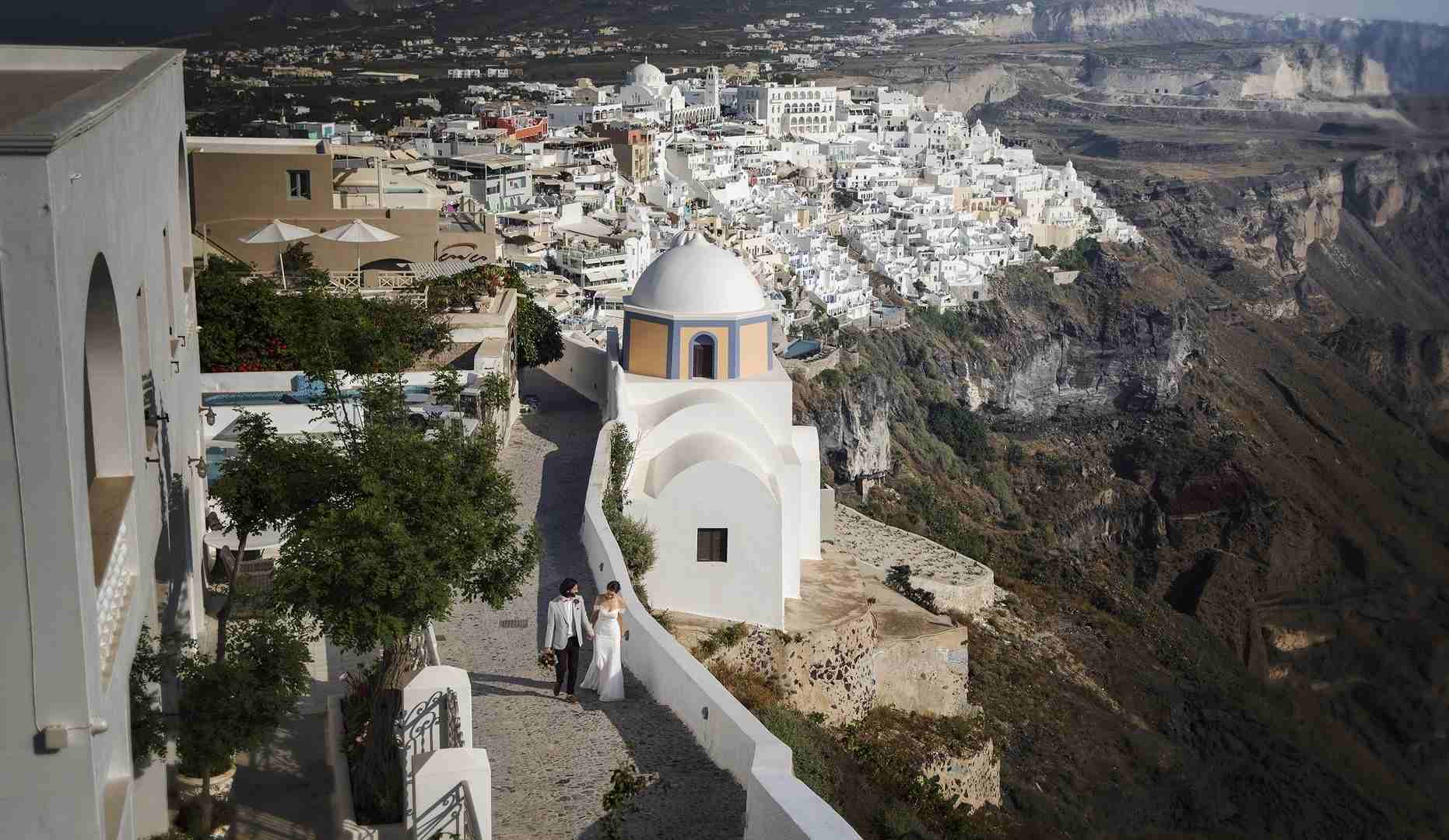 The Ampelos cafe in the middle of the city of Thera is a wonderful little cafe situated on the rooftop overlooking the caldera of Santorini. It’s located right on the main pedestrian strip of the city where at sunset it gets super crowded with tourists, so being above everyone in the rooftop space was great for uninterrupted views of the world-renowned sunset.

On one side of the reception space, there’s a magnificent white-domed church which made for a beautiful backdrop for Kerri and Tony’s head table, while the guest's tables were situated under the roofing, surrounding the dance floor. It was a beautiful spot to end what was an absolutely stunning day! 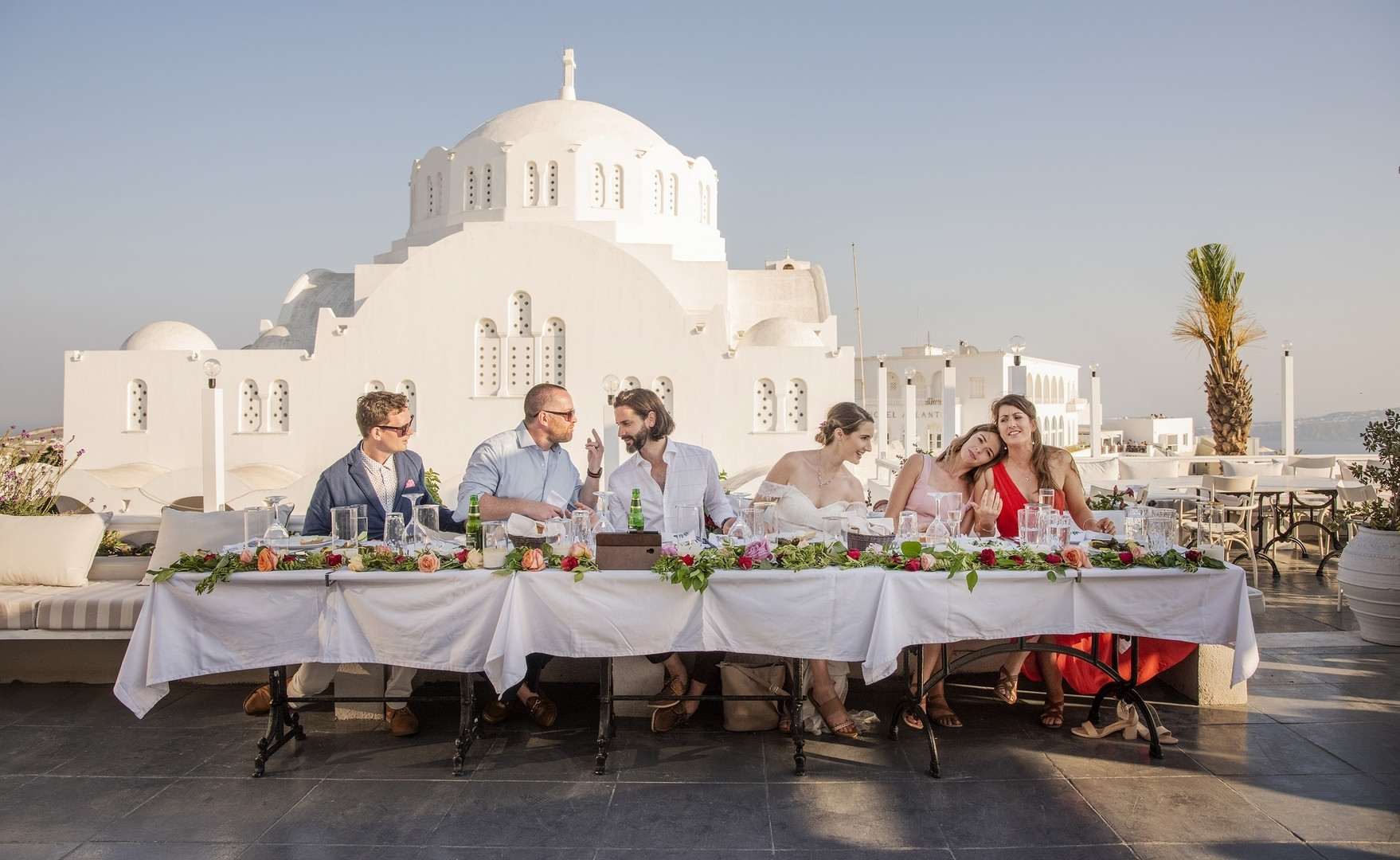 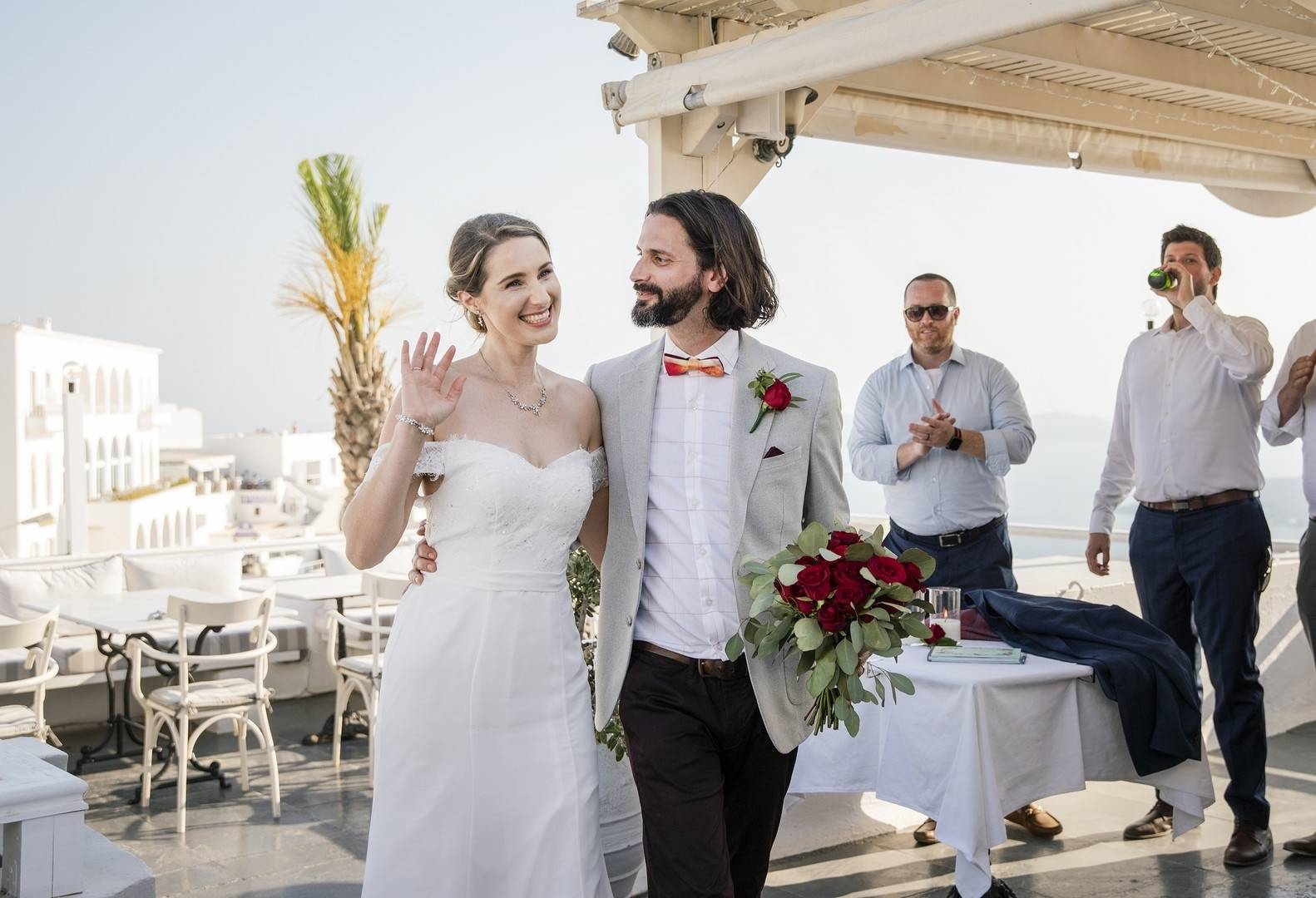 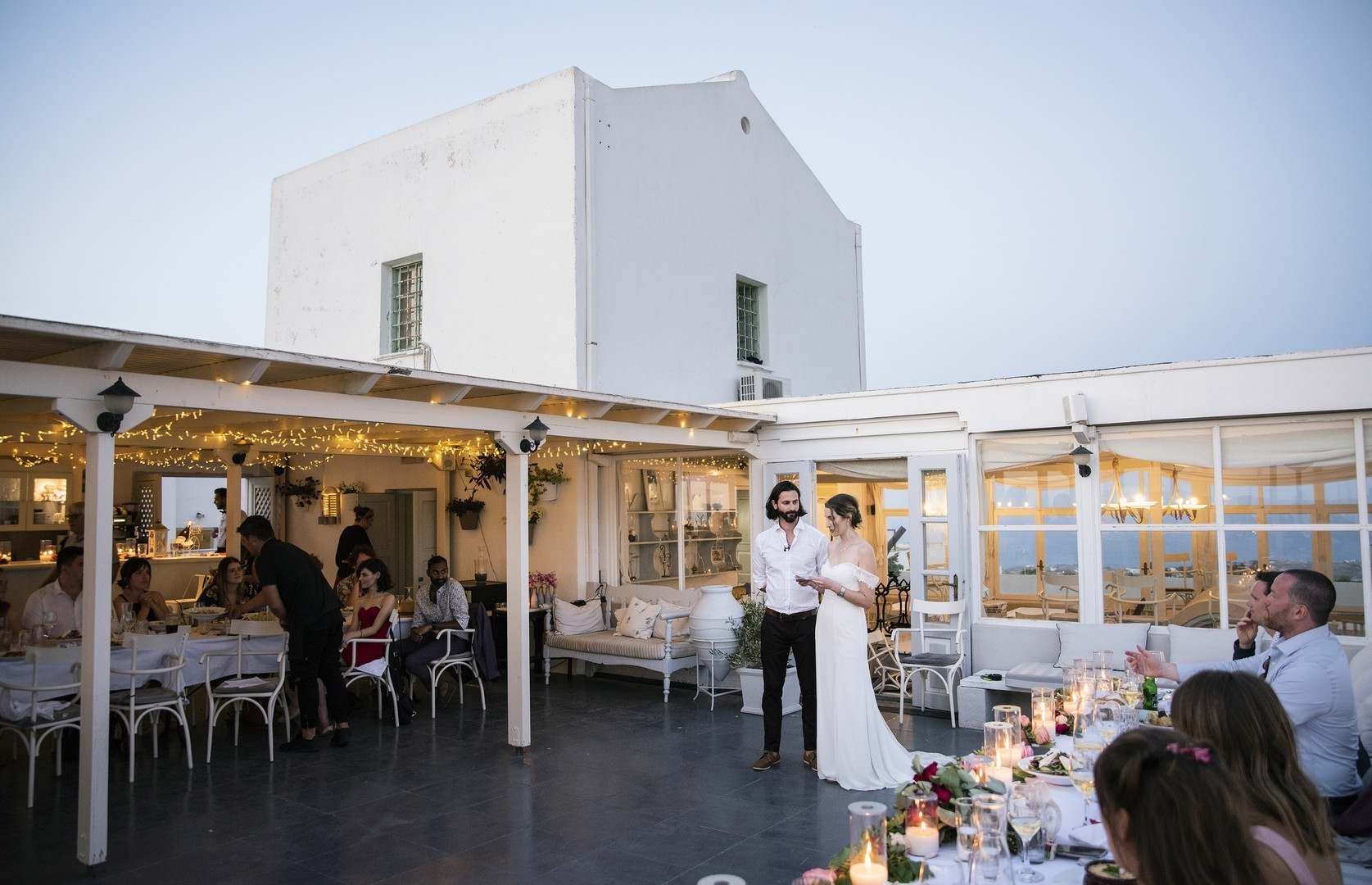 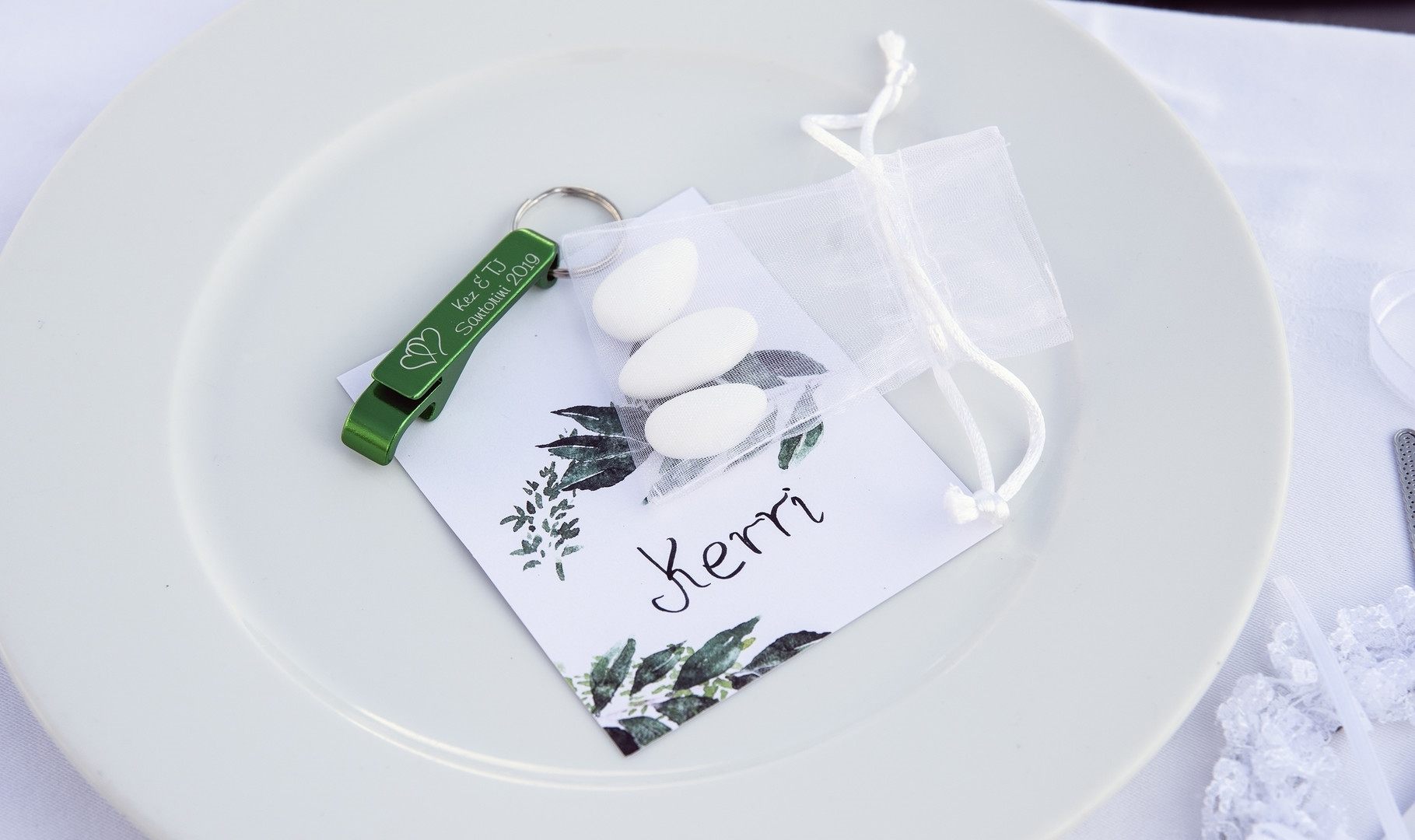 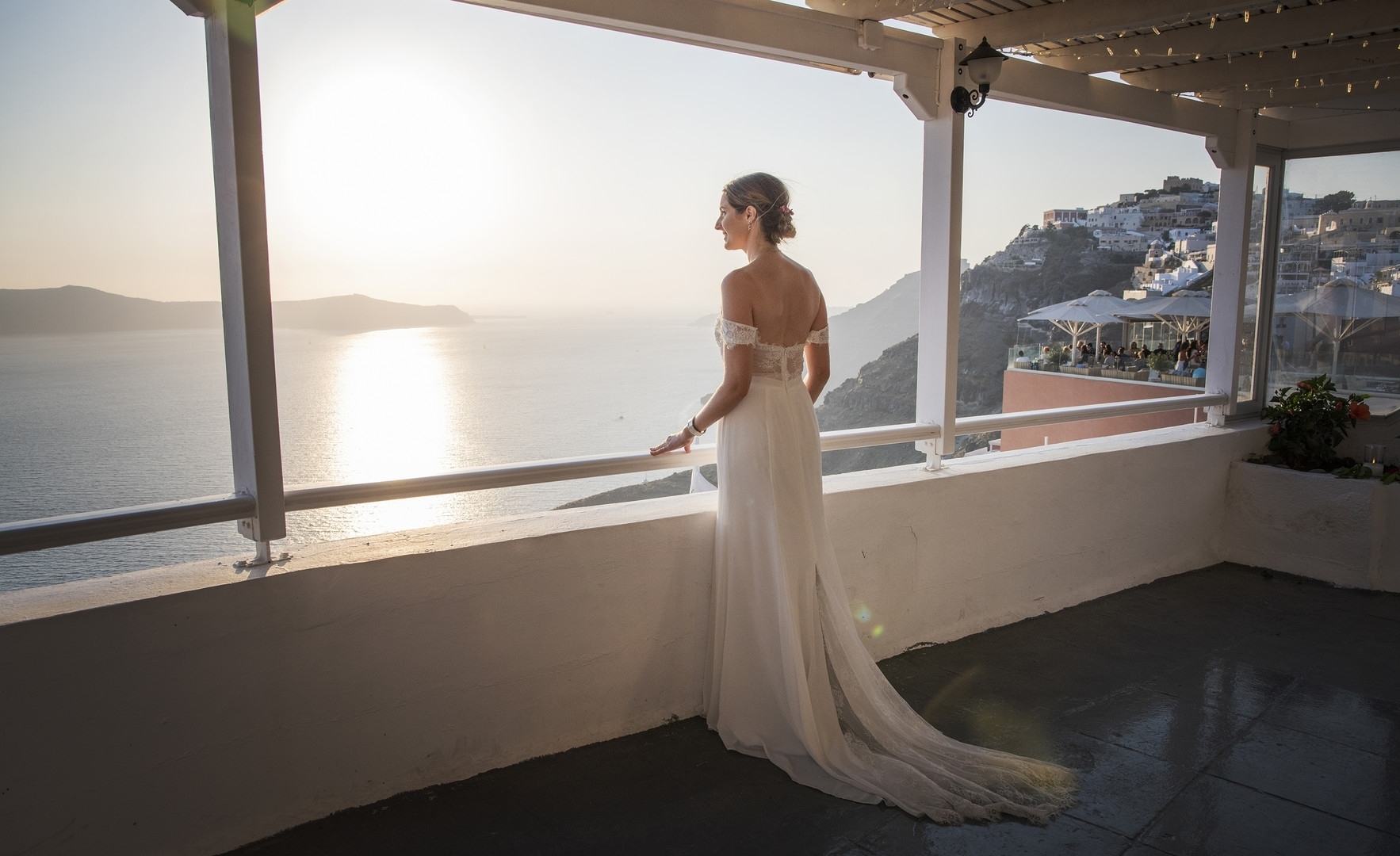 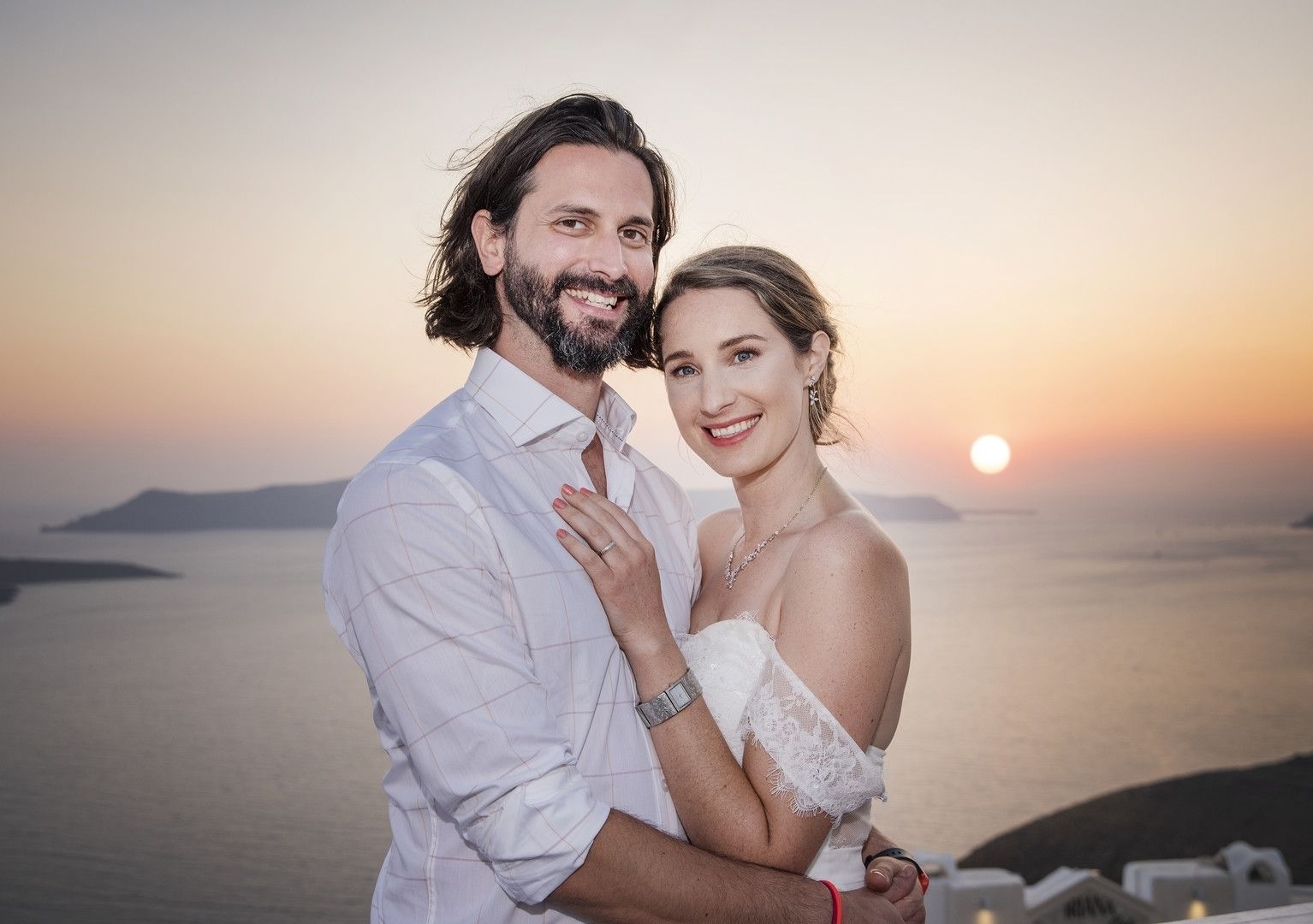 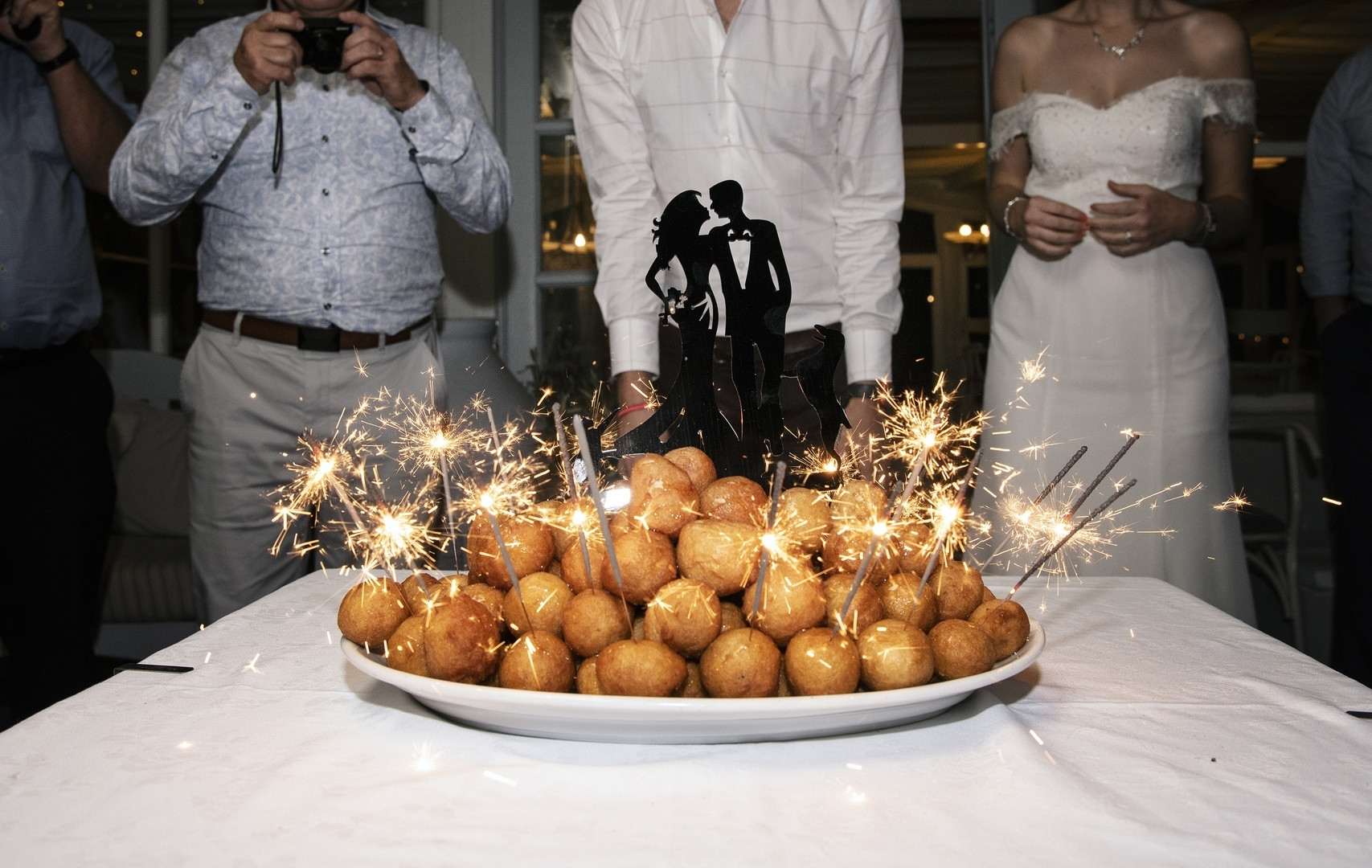 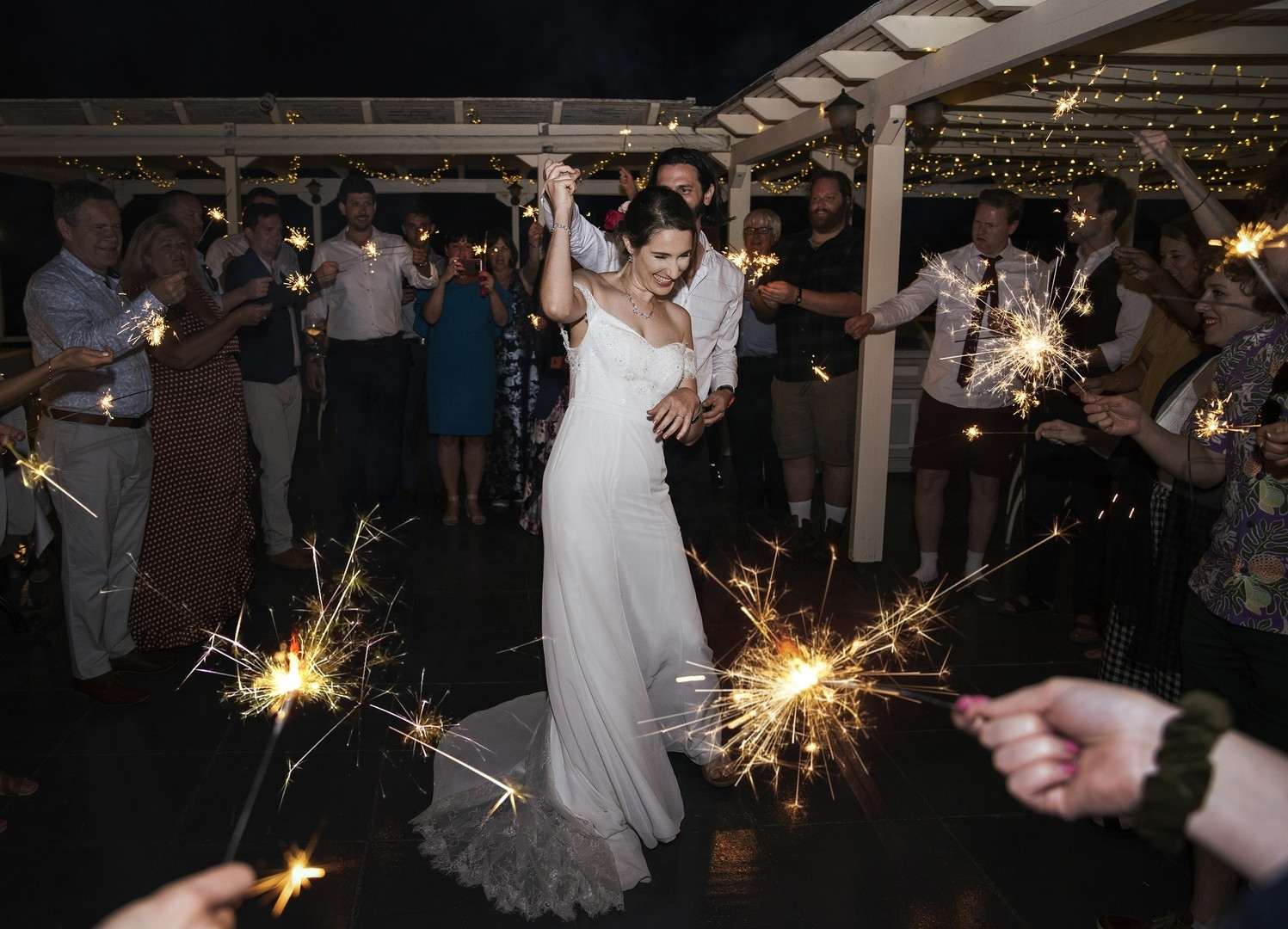 Captured with love by Sven Studios

Share this article
About the writer
Joselin Alexander
Writer @ Veilability

We'd love to chat about how Veilability is helping engaged couples virtually plan their own weddings by saving, comparing and messaging Venues, and booking tours. All in one place! And what this means for your wedding business.

Are you a Bride/Groom? JOIN US

Virtually plan your own wedding by saving, comparing and messaging Venues, and booking tours. All in one place!

Are you a Wedding Venue/Vendor? FIND OUT MORE

Request Veilability in Your City

Just leave a few details below and you'll be the first to know when we are heading your way.

This email is already registered with Veilability. If this is you, click here to reset your password

We have received your message and one of our staff will contact you soon for a chat.

We have received your message and one of our staff will contact you soon for a chat.

Login to access your Dashboard and all the great features Veilability has to offer.

Not a member yet? Join us here

Haven't activated your venue yet? Join us here